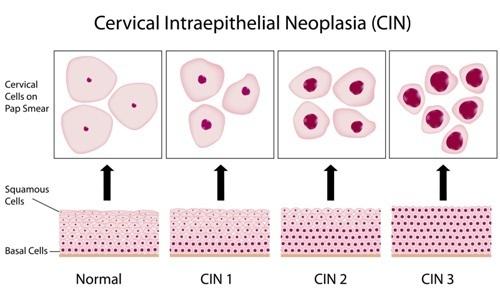 What Is Cervical Intraepithelial Neoplasia? How Is It Treated and Monitored? (SIN / CIN or LSIL /HSIL))

In fact it is normal that you are confused, we were also very much confused once upon a time 🙂 🙂
Therefore welcome to the subject explained under the title of “Terminology” in books.
We refer to cervical cancer precursor (precancerous) lesions as “Dysplasia” from of old. Dysplasia is actually lesion that we identify as “Cervical Intraepithelial Neoplasia”.
So what is it?
“Servikal” Dysplasia is “neoplasia” in other words abnormally developed tissues not passing through the lower layer that we call “basal membrane”, which does not overflow and is included within “intraepithelial” in other words within the tissue that we call epithelium (it is a tissue similar to our skin) included in the cervix, in other words “cervical”.
We divide dysplasia into three within itself: Mild (CIN I) Medium (CIN II) and Severe (CIN III)
Later Americans brought Bethesda system in 1988 as they wanted to dominate the literature. This classification was revised for 2 times in 1991 and 2001 as it was excellent (!).
In this system, different designations were made in the cells achieved in cytological cells (in cells achieved in smear) and histological evaluation (in biopsies made under colposcopy):
“Squamous introepithelial neoplasia” was used for abnormal cells achieved in pap smear, “cervical intraepithelial neoplasia” definition was (That famous CIN incident) used for cells achieved from the biopsy received.
If you say, I don’t care about these details. It cares you because you apply to “Google mother” as you see tens of large letter codes written like morse alphabet in pathology report you receive.
While you try to reach a conclusion from the definitions that you read and don’t understand most of them, some of which we also don’t understand, at the end, you reach to a point that “Yes, I am cancer” and you call my colleague in beyond measure or you call me.
Believe me, it’s not a problem if you go crazy, but it is very difficult to try to explain all these details on phone but most importantly to explain that you are not “cancer”. Therefore it is important 🙂 my friends. I continue to explain and you continue to read.
We were talking about CINs. Then, let’s explain what “Cervical Intraepithelian Neoplasia” means in cellular respect as much as I can:
Outer part of the cervix, the part seen in the examination, is covered with squamous epithelium. So the lowest layer of this tissue is “basal layer” in other words basic layer. As long as abnormal cells, dysplasia cells do not pass basal layer, we cannot talk about cancer! It is important that you understand it.
The area above basal layer is roughly divided into three by pathologists.
CIN I: It is the case of presence of abnormal dysplasia cells in 1/3 part neighboring the bottom basal layer of squamous epithelium tissue on basal layer.
It is the presence of dysplasia cells in 2/3 part as of lower layer of squamous epithelium in CIN II.
There are abnormal cells in all epithelial layers in CIN III as you can understand.
At this point, we should focus on “Carcinoma in situ” definition. Obviously the difference between CIN III or HSIL with “Carcinoma in situ” is always discussed among pathologists.
And I should say that it doesn’t clinically change the treatment I shall apply on the patient. But “Carcinoma in situ” diagnosis is important for pathologists, who are bound to classic ecole and only engaged in this issue, and differentiation must be made.
For instance; I remember very well that my valuable friend pathologist Prof.Dr.Ekrem Yavuz said “If I were a woman, I would know if I were carcinoma in situ.” while discussing this issue.
On the other hand, this terminology incident still continues.
After Bethesda system was renewed in 2001, this time in 2012 it was decided that CIN I was referred to as “Low Grade Squamous Intraepithelial Lesion = LSIL” and CIN II and III lesions were referred to as “High Grade Squamous Intraepithelial Lesion = HSIL” within the scope of “Lower Anogenital Squamous Terminology (LAST)” project.
If you say “It is enough. What are they trying for?”, I also don’t know but there are tens of stories explained by pathology masters that I talk to in my country.
However, one of the most interesting incidents that I witness related to the issue is that one of our French pathologist colleague went up to the rostrum in one of “Eurogyn” meetings, in which only HPV was talked, in 2001 and said, “Enough. I want my CIN II back, you cannot cancel it”. It is such an extent:-)
(Note: French professor told exactly the same, I didn’t exaggerate even though I like to exaggerate, it was very interesting and funny to us:-) )

As a result, you can see different classifications and terminologies used below as a table. 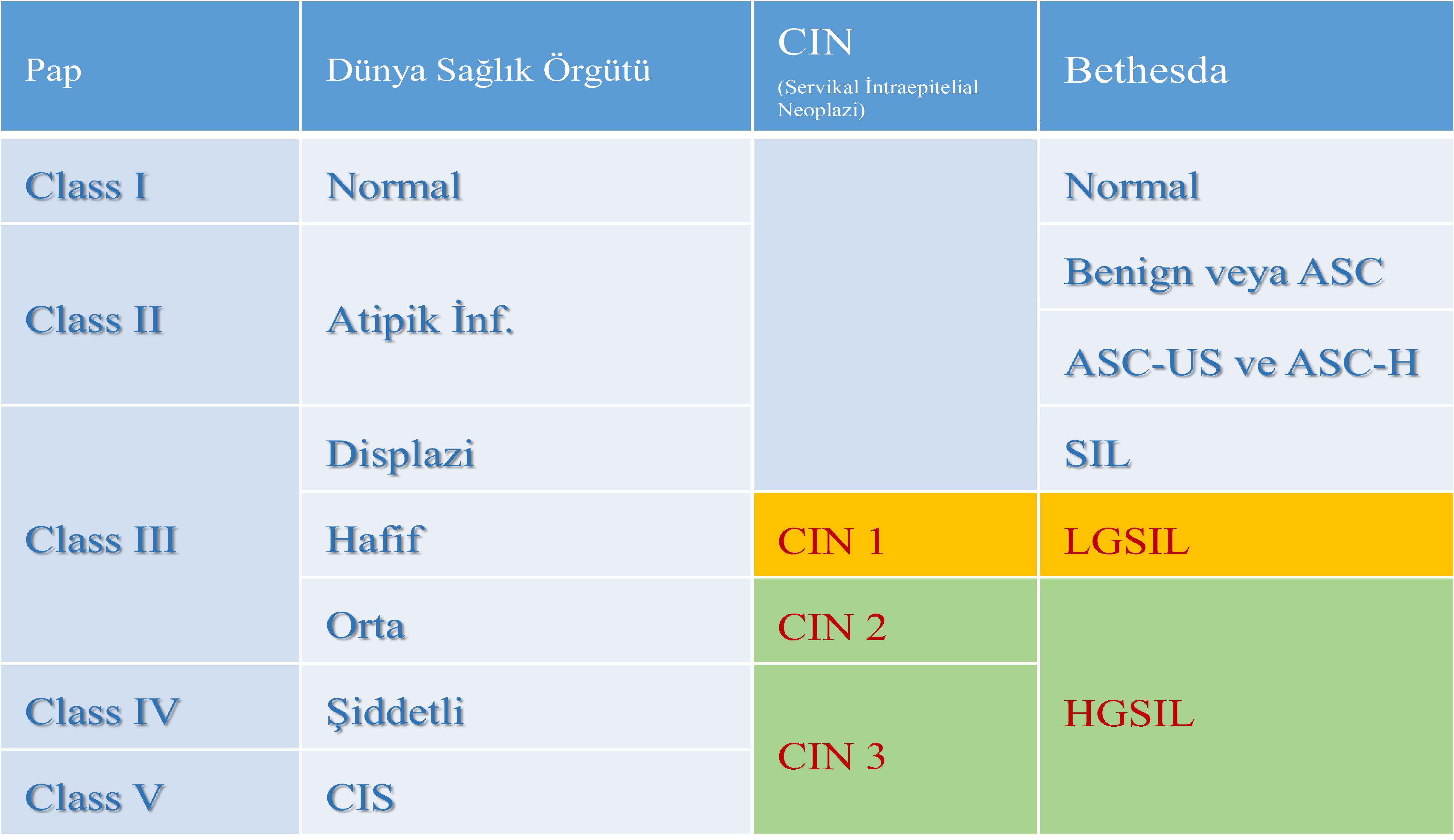