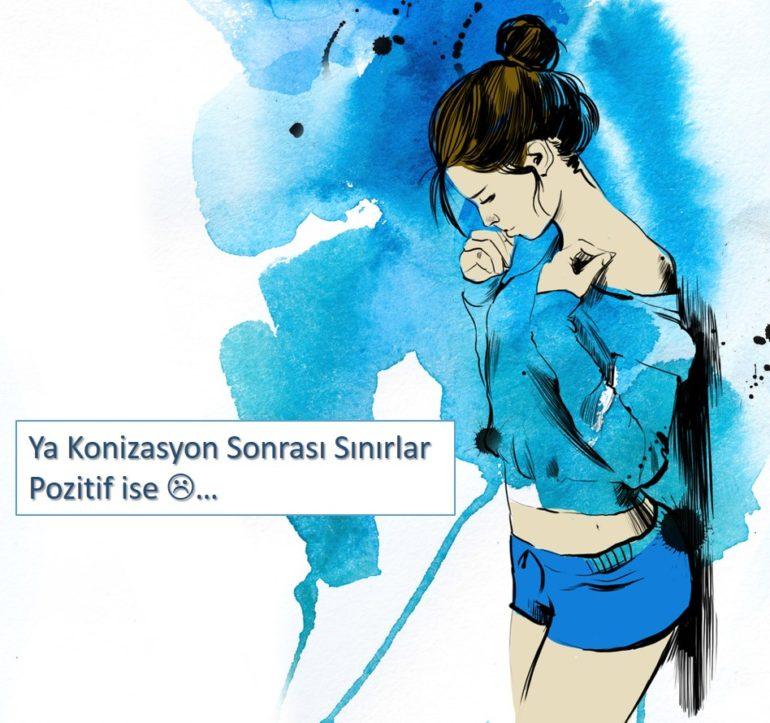 However, when all cases are evaluated, recurrence possibility of cervical cancer precursors, in other words cervical dysplasia (CIN 1-2-3) changes between 5 and 17% in 20 years of period after the treatment. (Martin-Hirsch PP, Paraskevaidis E, Bryant A, Dickinson HO. Surgery for cervical intraepithelial neoplasia. Cochrane Database Syst Rev. 2013)

Fundamental factors specifying these rates and recurrence risks are listed below:

Evaluation of Results Achieved After Conization and Impacts On The Patient

In case surgical limits are negative after conization, recurrence risks of precancerous cervical lesions are quite low. The largest study related to the subject is a research published in 2001 and involved 4417 patients. There are CIN III (HGSIL) lesions in all patients.

The patients with negative surgical limits after conization were monitored for 18 years and high cancer precursor lesions, in other words HGSIL (CIN 2 or CIN 3) were detected only in 15 of 4417 cases. Recurrence time is 8.9 years in average. No relapse occurred in remaining 99.7% group.

If the limits are positive, risk limits increase 5-6 times compared of patients with negative limits. Here important problem is at which stage the positivity is. You will say “What is it now?” 🙂 Let me explain as far as I can and please do not panic. They are definitely circumstances that we can overcome also without detriment to your fertility 🙂

During conization, as the name implies, we remove a part of the uterus in come shape and in a way to include “transition zone”. There are certain sections of this part removed. For example, I have mentioned about glandular epithelium covering cervix canal while I have listed the risks above, if entire lesion keeping this part is not removed and the limits are positive and also the limits are positive in outer part of the cervix, risk increases very much.

Therefore, it is quite important that surgical limits are negative or if positive, to determine where they are positive.

So, if the limits are positive, when does the lesion recur?

Recurrence period of the disease in a patient, to whom LEEP Conization is applied and the limits are positive, is 4 years in average. (Manchanda R, Baldwin P, Crawford R. et al. Effect of margin status on cervical intraepithelial neoplasia recurrence following LLETZ in women over 50 years. BJOG. 2008;115(10):1238.)

This situation may be really confusing and it is difficult for the gynecologist to explain the issue to the patient. It is helpful to emphasize an issue for one more time. If we talk about HPV infection, it should be emphasized that the relationship between HPV and human immunity system is still not understood clearly. In this respect, we encounter so many problems that we cannot clarify.

No lesion, neither CIN 2 not CIN 3 may be detected in conization performed within the framework of the pathology result achieved after colposcopic biopsy. The reason for it is that all present lesion is removed when the colposcopic biopsy is received.

The patient asks the question of “Then why did you do?”, when we explain it. We perform conization, because while biopsy of the lesion is received, it is impossible for us to know that it completely disappears. And in fact not detecting a lesion or very small lesion does not demonstrate that you require a different follow-up.

Livasy et. al. reported in a research published in 2004 that no lesion was detected in 14 of 674 patients, to whom LEEP conization was made due to CIN 3 (HGSIL). However, when the patients were followed up, it was detected that recurrence frequencies of the precancerous lesions in cervix in these cases were not different than other patients.

Therefore, routine never disappears. Also HPV typing is quite important in these cases. It must be performed. HPV typing should be made in conization materials received or from smear in subsequent follow-ups, though there is no lesion. (Livasy CA, Moore DT, Van Le L. The clinical significance of a negative loop electrosurgical cone biopsy for high-grade dysplasia. Obstet Gynecol. 2004)