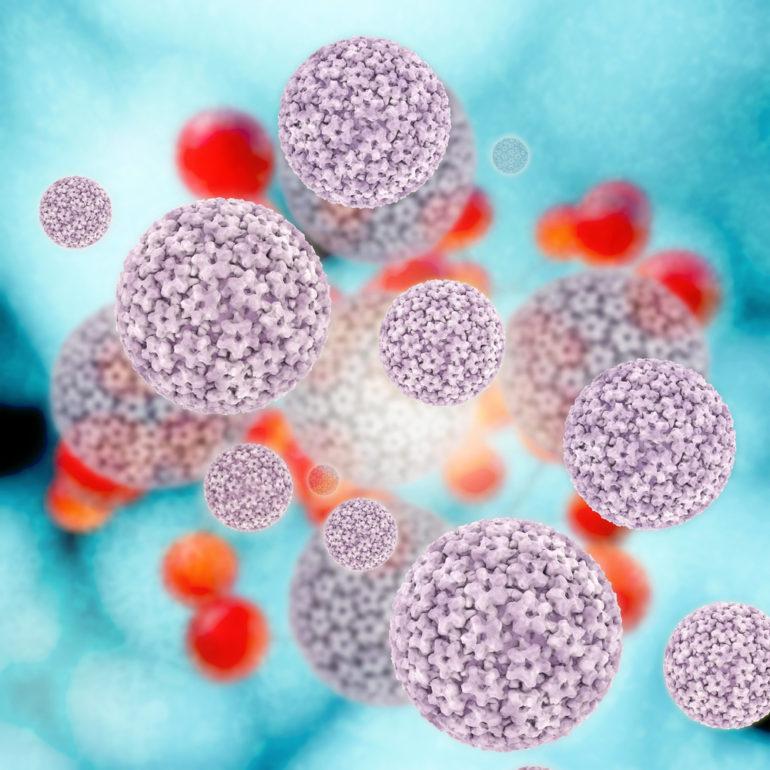 What is a virus?

Viruses are small organisms that can not be seen via a microscope and cannot reproduce without using another living entity.

They have to get into a living cell in order to continue their life cycle. This live cell is a ‘house’ for them.

Viruses take over the control of their housing cells in order to reproduce and they create the necessary environment for reproduction within this house cell. Viruses can enter the body through mucosa or other cracks on the skin.

The tissues we call mucosa are generally located on moist and more sensitive areas that are opening the body to the outside world.

These are; inside the nose, inside the mouth, eyes and surface of eyelid and genital organs. They find their housing cells after going through these areas and infect it. For example, flu viruses get into cells that are located on the respiratory system. (Ex; nose, sinuses, air-tube or the lungs)

HPV virus infect flat cells that cover the mucous, or squamous cells as called by know-it-all doctors such as myself. 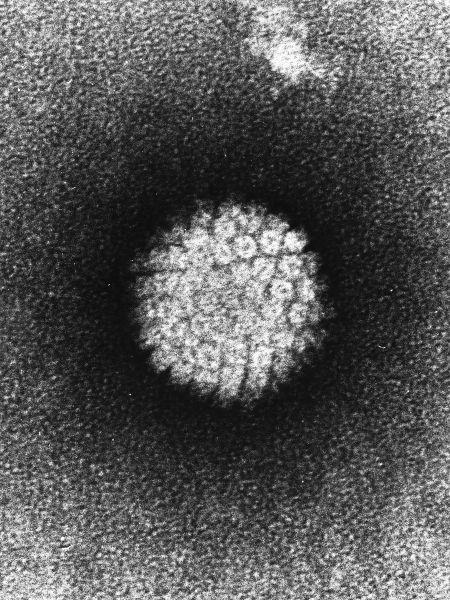 How HPV is seen on an electron microscope (https://tr.wikipedia.org/wiki/Dosya:Papilloma_Virus_
%28HPV%29_EM.jpg)

Papilloma viruses on humans are viruses that include 7.9 kb DNA molecules which are icosahedral, aeronautic, double-helix.

It has 6 early open chain sections ( E1, E2, E4, E5, E6 and E7), it regulates DNA replication, transcription and cell transformation. In short, it is this “Early” E, open chain section that does all the work and cause the virus to turn into a disease.

2. How HPV cause infections?

HPV infections multiply in epitel cells (squamish cells) Epitel tissues that cover mucosa and upper layer of our skin tissue, is made of layers of cells and a basal base in the bottom.

The virus cannot get attached to live cells that are sound. There needs to be micro scratches or traumas that expose the most bottom layer of the basal base which is the epitel layer in order for HPV to attach to cells.

After getting to the most bottom layer of the basal base, the virus firstly synthesizes early proteins and move upwards thanks to this synthesizing process. “Late” L1 and L2 proteins are synthesized on the upper epitel layer.

Infectious process and emergence of the disease is slow if HPV is involved.

Basic Rule: HPV virus DO NOT EFFECT BLOOD, INFECT BY BLOOD or MOVE IN BLOOD.

Although some publications say that it might infect via blood, this is still an ongoing discussion. Since it does not infect blood, the immune system of the body does not recognize HPV quickly and due to this the infection takes a long time.

It might take around 12 to 24 hours for it to transcripting itself, which means multiplying itself. During this period, antibodies which are already existing are thought to be effective on prevention of the virus. This is the source of the protecrive effects of HPV vaccinations.

It is thought that the infected basal ceratinosits play the main role in formation of HPV lesions.

ACLICK HERE FOR THE ANIMATION, which explains how HPV infects the body and how the infection develops.

HPV infection does not break the cells apart, but the cells that are infected flaking off over time, help the infection to develop further and spread.

Also the HPV virus can survive without a housing cell and outside in low temperatures. This is why you might get infected from the floor, where someone with HPV infection on their feet walk barefoot.

But this is NOT THE CASE FOR GENITAL AREA WARTS.

Basic Rule: GENITAL AREA HPVS CAN ONLY INFECT AREAS THAT HAS MUCOSES THAT ARE LOCATED IN THIS AREA OR SIMILAR AREAS.

To give an example; someone with warts on their penis or outer lips/vagina would not infect if you touch it with your hand and then touch a non-mucosal area.

BUT, especially the warts seen in mucosas located in the mouth are different to the ones on genital areas!! It is harder to see and detect relatively. The reason for this is that the tissue (epitel) in the mouth flakes off a lot faster and regenerate.

HPV is a DNA virus, consisting of 8000 couples of genetic materials.

But the part which you should know and understand is; how HPV causes cancer.

The multiplying of the cells in our body, is in balance like all other events that take place in the nature.

This balance is managed by two gene centers in humans.

The multiplying, synthesizing of the cells are managed by proteins called “ONCOGENS”, this multiplying is controlled by the “TUMOUR SUPRESSIVE GENES”.

The process we call cancer, is the break of the balance between these two forces which regulate and control the multiplying of normal cells.

Oncogens are made out of 3 types of proteins that complete each other: 1. Peptide growing factors and receptors (receptors that perceive hormones and make them work in cells) 2. Cytoplasmic factors (inside the cells are filled with a liquid called cytoplasm. Organelles of the cells swim in this liquid and interact) 3. Nuclear factors (factors in the core of the cell)

These three factors complete each other and are pieces in the process chain. The most important one is the oncogene in the cell core and is called E2F. Don’t forget E2F, sincethe spoilage of this oncogene is the main factor for the development of cervical and other types of cancers that are a huge problem.

Retinoblastoma Gen is the first TSG to be found. Keeping the balance between retinoblastoma gen and E2F is vital in order to keep the multiplying of the cells under control and subsequently for the biology of the tumour.

The cells we call cancerous are actually our cells which are mutated due to interior or exterior factors. In some of our organs, for example the digestive systems regenerate all its cells within 12 to 24 hours.

The regeneration of all these calls might cause some fabrication errors.

When the error cell is formed, TSGs called p53 which regulate the multiplying of these cells play a huge role.

P53 plays quite an important role. If you type P53 in google, you will get around 1 billion and 430 million results (try it, you will see).

P53 is called the guardian of cells. It is the biggest obstacle to cancerous cells’ formation.

Once cancerous cells are formed, they rig p53 by changing it. For example, in the treatment of ovarian cancer, the main focus is on developing vaccinations that fix the broken p53.

Now let’s get to the important part:

Once HPV virus enters the cervix or genital skin (penis or inner lips etc.) and get inside through a small scratch, it enters the bottom part of basal layer and synthesizes proteins that we call “early” proteins.

It enters the basal layer and forms “Early Proteins” (E1,E2,E3,E4,E5,E6,E7) inside these cells. Then the process that cause cancer starts taking place.

If we go step by step, you will understand what kind of role this virus plays in the development of cancer:

Would you like to see the structure of the virus up close? Well then click on the link below? 😊

CLICK HERE TO WATCH THE ANIMATION on the structure of the virus, that explains the Early and Late Protein sequence.

If there are these effected cells along 1/3 of the epithelial surface of cervix we call this CIN I. If it is 2/3 then CIN 2 and if these infected cells are all over then the precancerous lesions at cervix that is called CIN 3.

If the cells pass through basal layer then we give you bad news. You have cervix cancer.

4. Now you got the basics, If you want more complex academic information, it is below for the interested 🙂

HPV’s life cycle is closely dependent on the life cycle of the keratinocyte cells of the host.

It is thought that alfa integrin and laminin receptors have a function in passing of HPV virus to the epithelia.

After this stage, the genetic material of the virus passes to the cell nucleus via mechanisms not completely clear and 10 to 200 copies of this genetic material is made there. After this replication, the cell starts to multiply faster and much more than it should via again unknown mechanisms and this cell group starts to become more distinct on the skin more than the neighboring area. That is how the papilloma becomes visible.

It is know that HPV is a virus connected to humans. The genetic studies made show that HPV is modified in 5 main branches to adjust to the human evolution. For example, researchers showed that HPV type 16 has 2 main variants, European HPV16-E and non-European HPV16-NE.

Also it contains a long control region (LCR) that is not coded.

After the host cell is infected, the viral early protomer is activated and polycystronic primary RNA containing 6 early ORFs are started to be copied. These polycystronic RNAs are later on divided into active RNA pieces to create may mRNAs.

E6*I, one of these RNA pieces, provides the production of E7 protein. One of these early proteins, E2 provides the regulation of this cycle, high E2 levels suppress the replication.

HPV genome, when integrating into host genome, inserts itself breaking the site coding E2 and this removes the inhibition on E6 and E7. Increase of E6 and E7 protein levels of viral genome in the host cell triggers the uncontrolled cell division increasing the malignancy risk.

E6 and E7 protein level determines the severity of the lesion/disease at the cervix.

Roles of E6 and E7 in cancer development

E6 and E7 proteins inhibit two tumor suppressor genes in the cell. p53 is inhibited by E6 and pRb is inhibited by E7. E6 and E7 proteins provided that the cell cycle is at a proper condition to replicate viral genome over and over again for the keratinocyte cells. E6, together with the E6 related protein in the host cell that has ubiquitin ligase activity, triggers the inhibition of p53 causing proteosomal separation.

Whereas E7 gets into competition for binding to pRb with the E2F controlling the replication and provides the cell cycle to progress. All HPV types increase temporarily the cell replication however under laboratory conditions only HPV type 16 and type 18 immortalize the cells and creates this condition.

Also HPV type 16 and type 18 are shown to be unable to immortalize the rat cells alone but achieve this with “ras” oncogene.

At upper layers of host epithelia L1 and L2 genes provides the packaging of the virus genetic material called capsid. When capsidation of the viral genome happens, the capsid enters into a redox dependent maturation process and at the end of this virus disperses along the layers of epithelia.

This maturation phase provides the stabilization of the viral packages called virion and increase their infectious strengths. As the dead epithelial cells fall off these virus materials go on their life cycle.

6. Research on “Early Proteins” of HPV

HPV is a DNA virus causing lesions on keratinocytes on the skin (i.e. epithelial cells synthetizing keratin and present frequently in the epithelial tissue).

HPVs causing skin lesions are low risk HPVs. The HPVs responsible for 90-97% of genital warts are type 6 and 11. Infections caused by HPV viruses are researched especially for papilloma virus family oncogene proteins E1, E2, E6 and E7 as they are considered to cause cancer.

In the studies conducted, in cervical cancer cases, it is determined that especially HPV type 16 and type 18 are positive and in these high risk HPV infections E6 and E7 are more active compared to E2.

It is now clearly known that E6 and E7 oncogenes disrupt the cell cycle in keratinocytes. E6 binds to p53 and inhibits cell death and increases the replication of viral DNA. P53 is a repair mechanism present in the cells. It stops the proliferation of the damaged cells or provides controlled death called apoptosis and prevents multiplication of the abnormal cells.

E2 also provides apoptosis or stopping of the cell cycle over the gene regulating the p53 gene called Bax.